“… It never proved possible to validate the tests by culturing, purifying and analysing particles of the purported virus from patients who test positive, then demonstrating that these are not present in patients who test negative. This was despite heroic efforts to make the virus reveal itself in patients with Aids or at risk of Aids, in which their immune cells were stimulated for weeks in laboratory cultures using a variety of agents.
After the cells had been activated in this way, HIV pioneers found some 30 proteins in filtered material that gathered at a density characteristic of retroviruses. They attributed some of these to various parts of the virus. But they never demonstrated that these so-called “HIV antigens” belonged to a new retrovirus.
So, out of the 30 proteins, how did they select the ones to be defined as being from HIV? The answer is shocking, and goes to the root of what is probably the biggest scandal in medical history. They selected those that were most reactive with antibodies in blood samples from Aids patients and those at risk of Aids.
This means that “HIV” antigens are defined as such not on the basis of being shown to belong to HIV, but on the basis that they react with antibodies in Aids patients. Aids patients are then diagnosed as being infected with HIV on the basis that they have antibodies which react with those same antigens. The reasoning is circular. ”
Neville Hodgkinson

“I repeat, we did not purify” Luc Montagnier, Pasteur Institute Interview July 1997
Of significant interest, in a 1997 interview, Professor Montagnier said he did not purify his 1983 HIV. And that despite a Roman effort, he was unable to find any particles with the morphology typical of retroviruses in his gradient purified virus. This interview was published by Huw Christie in Continuum and a video tape copy is sitting on the table in front of where I am sitting. (This video was later given to the South African Government after obtaining permission from its copyright owner).

If you perform a protein electrophoresis on the infected and non-infected gradient purified material, you get this picture: 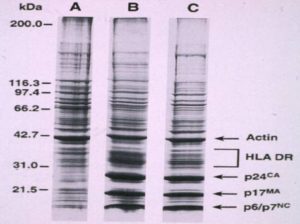 The only differences between lane A , which is non-infected, and lanes B and C, which are, are quantitative, not qualitative. The bands labeled HIV down the bottom of lanes B and C can also be seen, although not strongly, in the non-infected specimen. This could be explained by the different culture conditions. The infected cultures originate from AIDS patients who are highly oxidised and these cultures are chemically stimulated. And this material used to “infect” these cultures already contains these proteins whereas the lane A cultures are cultured on their own. This same data was published in an earlier paper by the same authors but without labels indicating viral proteins. We asked the senior author how they proved the strong bands were HIV proteins. His reply did not mention any such proof but merely informed us that the labels were added at the suggestion of the editor to better orientate the reader. Independent data show that the proteins labelled p24 and p18 have been found in a wide variety of uninfected human tissues using AIDS sera and monoclonal antibodies to the so called “HIV” proteins. And where are the rest of the so called HIV proteins in this “purified” virus? Where are p41 and p65 and p120 and p160? In other words, these data are better explained by HIV proteins being not viral but cellular. In fact there are much other, independent data proving that all the “HIV” proteins are cellular or, at the very least, non-specific.

In 1983 Montagnier declared that his p45 (now p41) protein is cellular actin which “contaminated” his “purified” virus. He reiterated this in 1996. Others have proven that actin is a component of pure HIV. HIV researchers accept that the p160 protein is present only in cell cultures, not HIV itself. But p160 is one of the HIV antigens used in the Western blot and is presumably also present in the HIV ELISA. This means the method used to obtain the HIV proteins for the WB does not use pure virus as we can now readily accept given the EMs of “purified HIV”. But there is another explanation.

In 1989 Pinter and his colleagues did a chemical analysis of the so called HIV glycoproteins present in the WB and found that p120 and p160 are oligomers of p41. They went so far as to warn that “Confusion over the identification of these bands has resulted in incorrect conclusions…some clinical specimens may been identified erroneously as seropositive…”

The non-specificity of the p24 antigen test is so obvious that it is accepted by no less an authority on HIV testing than Philip Mortimer and his colleagues from the UK Public Health Laboratory Service, “Experience has shown that neither HIV culture nor tests for p24 antigen are of much value in diagnostic testing. They may be insensitive and/or non-specific”. p24 arises in cultures of non-infected individuals and in fact the highest levels of the p24 HIV antigen are reported not from AIDS patients but from no risk, non-HIV-infected organ transplant recipients.

Henderson (1987) studied the p30-32 and p34-36 of “HIV purified by double banding” in sucrose density gradients. Comparison with the amino-acid sequences of these proteins with Class II histocompatability DR proteins proved that “the DR alpha and beta chains appeared to be identical to the p34-36 and p30-32 proteins respectively” Cellular origin also acknowledged by other HIV experts such as Arthur (1995).

AIDS sera as well as monoclonal antibodies to the HIV p18 protein bind to a wide variety of tissues from non-AIDS, non-risk, non antibody positive patients and, if we look at the normal human placenta in a little more detail,

Thus, using antibody probes including monoclonals, three of the HIV specific proteins show up in the placentas of non-HIV-infected women.

Thus, if gradient purified infected material consists of the same proteins as uninfected material, and does not contain retroviral particles, and is not pure, then it is difficult to see how anyone can refer to this material as purified HIV. And use it for diagnostic purposed to pronounce humans infected with a particular lethal retrovirus, HIV.

Well, regardless of the origin of these proteins, AIDS patients most certainly have antibodies that react with these proteins and these reactions correlate with either having AIDS or developing and dying of AIDS. Or being in a risk group. Of this there can be no doubt. The problem for the Perth group, is how to explain this. Well we can only suggest an explanation. Thanks to Kashala and Muller and others we know that antibodies to mycobacteria and fungi such as Candida albicans bind to the proteins present in the HIV antibody test kits. And mycobacteria and fungal diseases comprise about 90% of AIDS diagnoses. Thus some, perhaps quite a lot, of the reactivity might be explained on this basis. AIDS patients have a plethora of autoantibodies and this may explain further reactivity. And under the guise of the immune activation that accompanies AIDS, we can not discount non-specific antibody production and other cross-reactivities. But the problem for us all, is whether these reactions are caused by infection with an AIDS causing retrovirus. And is this all the time, some of the time or never? Is there anything we do to resolve this conundrum? Yes there is. We can walk humbly up to Mother Nature and ask for her help. She will tell you the only way to answer this question is to use a gold standard.

Use the HIV gold standard. Compare the antibody reactions with the virus. Until you do that you’re just staring at entrails.

Unfortunately, HIV isolation is problematic in the extreme. When you analyse the detail, at best HIV isolation consists of a series of non-specific phenomena. Measurement of reverse transcription, detection of particles in culture fluids, antibody/antigen reactions all have non-retroviral, non-infectious causes. But we can appreciate that twenty years ago, under such intense pressure to find a cause for AIDS, scientists may have been compelled to interpret these phenomena as proof of isolation of a retrovirus. Nowadays, what is called HIV isolation, is detection of a p24 protein in cultures with an antibody. This is not isolation of a virus