HIV has never been observed under an electron microscope in the uncultured blood plasma of AIDS patients. Particles claimed to be HIV have only been observed in cell cultures that have been stimulated by certain chemicals or irradiated. The first and only micrographs of ‘purified HIV’ were published in 1997 by two groups of scientists – a US team led by Julian Bess and a Franco-German team led by Pablo Gluschankof. They admitted that the vast majority of the material in the images consisted of microvesicles, i.e. cellular fragments, but claimed that some particles looked like retroviruses and were ‘HIV’.

Yet none of these particles had all the morphological characteristics of retroviruses, or even their principal characteristics: a diameter of 100-120 nanometres (officially reduced to 80-100 nm in 2000), and surface spikes and knobs. In the Franco-German study the average ‘HIV’ diameter was 136 nm and no particles were smaller than 120 nm. In the US study the corresponding dimensions were 236 nm and 160 nm. In other words, the American ‘HIV’ is about twice the diameter of the European ‘HIV’. In addition, of the 12 proteins that allegedly compose HIV, only three were detected by Bess et al., but they were found not only in the material supposedly containing ‘HIV’ particles but also in the material without it – only the quantities were different. The Perth Group concludes: ‘This is as good an evidence as one can get that nobody has: (1) proven the existence of the “HIV” particles; (2) purified the “HIV” particles; (3) proven the existence of “HIV” proteins and RNA’ (theperthgroup.com). 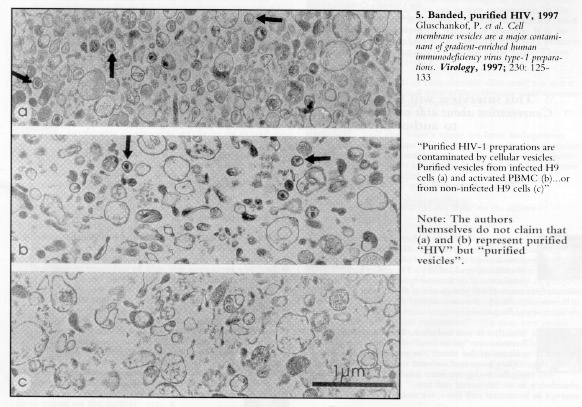 The Bess paper included a protein electrophoresis of “HIV-infected” and noninfected density gradient purified material. If the “HIV-infected” material contains a retrovirus HIV as well as cellular material (microvesicles) then, compared to the non-infected material, it must contain the extra 15 proteins said to constitute the HIV virions. However, the Bess data show there are no extra proteins. Apart from quantitative differences in three of the proteins which Bess labelled p6/7, p17 and p24 in the “HIV-infected” material (B&C), the protein profiles of B&C and the uninfected preparations (A) are identical. If there are no extra proteins there are no HIV proteins. If there are no HIV proteins there is no HIV. The particles labelled “HIV” are nothing but cellular microvesicles. 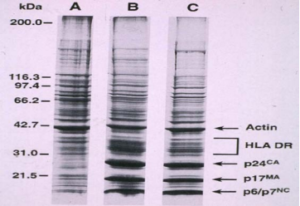 In email correspondence Julian Bess told the Perth Group, “We agree that you can come to the conclusion from gel electrophoresis patterns that there are only quantitative differences between HIV and microvesicles [cellular debris]”.

If Bess agrees that HIV and cellular material contain the same and same number of proteins, then he must also agree “you can come to the conclusion” there are no HIV proteins and thus no HIV. Bess also told the Perth Group, “We did not determine the identities of the bands [p6/7, p17 and p24] in this particular gel…these labels were added when one of the reviewers asked for them…He felt it would help orient readers when looking at the figure”. The p6/7, p17 and p24 proteins which Bess and his reviewers assumed are “HIV” proteins, are also present in lesser amounts in the uninfected material. The higher concentrations (darker bands) in the “HIV-infected” material can be explained by differences in the manner in which the cell cultures were obtained and maintained. Since the existence of p24 was proven by Montagnier, and originated in density gradient material in which there were no retrovirus particles, it can only be a cellular protein. And since p6/7, p17 and p24 are derived from a larger, p53 “polyprotein”, p6/7 and p17 are also cellular proteins.