Dont get confused by the missinformation campaigns which objetive is to make you believe a virus called hiv was ever discover.

1) “US government created it as a bioweapon”
2) “It came from the monkey virus SV40 in contaminated polio vaccines”
3) “Gallo stole it from Montagnier, but both governments agree to share the patents”
4) “Pharmaceutical company Bayer knowingly sold HIV tainted vaccines to overseas countries”
5) “A nobel prize in 2008 is shared to the HIV discoverer Montagnier”

HIV was never found in human beings, never forget that.

Its expresion is only generated in lab conditions, in vitro, under heavy stress with powerful quemicals and cancer cells . In fact from those samples in soups of leukaemic cells ( Gallo ) or umbilical cord lymphocytes (Montagnier) some proteins where chosen to be the ones that belongs to a new exogenous retrovirus, from where they after make test kits. Proteins that are commonly found in healthy people and “negative” people. HIV tests do not detect a virus, they detect non specific antibody reactions to human proteins that are in the test kits. Autoantibodies – We all have those antibodies in low or high amounts, when you are ill all antibodies are higher and thats what make a positive result. That has nothing to be with a virus infection. The manufacturers of the test kit place an upper limit of the reaction in which it turns something to be “positive ” . Again is not a YES or NO reaction, all samples reacts , but there is an arbitrarium limit place there to define a positive or negative result. Thats why the sample to be ” tested ” have to be diluted 400 times, if you dont do that, all tests results in “positive”tests.
That and the lack of a real purified virus ( gold standard ) are the reasons why up today the FDA has never approved a test to be use for HIV infection. No Elisa, no Western blot, no viral tests. There is no test that can detect a phantom virus.
The viral load test PCR as its inventor and Nobel Prize winner ( Kary Mullis ) said : ” DOES NOT DETECT PRESENCE OF A VIRUS ”
What viral load PCR detects are short RNA or DNA secuences ( of the Human Genome ) . 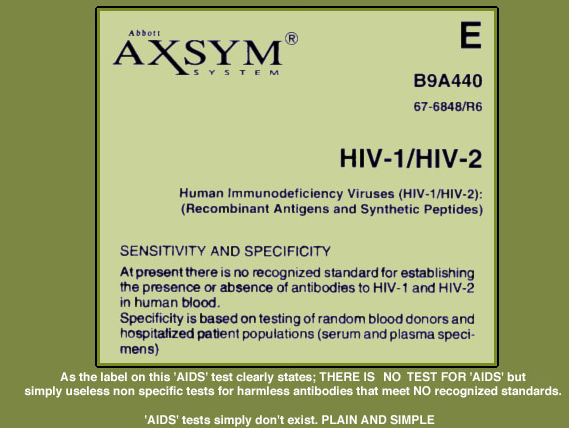 ” The HIV antibody test is characterized by an arbitrary measuring threshold. In this way the test was able to identify, not HIV, but people whose immune cells from particularly high levels of antibodies; who may be undergoing an increased amount of oxidative stress from long-term drug use or from chronic exposusre to environmental toxins, antibiotics, psychic trauma, vaccines, nutricional deprivation, etc. In other words, the “HIV antibody” tests measure an antibody reaction against what Gallo put into the test substrate: indeterminate proteins excreted by repeatedly stressed human immune cells that had been co-cultured with cancer cells. The proteins that Gallo identified were not the cause of immune deficiency, but the consecuence of severe long-term immune stress that had nothing to do with an “HIV infection” …

… ” Gallo combined the cells of multiple patients and mixed these cells with strong oxidizing agents and leukemia cell line in his culture medium. The strong oxidizing agents damage DNA and would naturally lead to the increase of the enzyme RT because RT is necessary to make DNA repairs.
He also neglected to mention in his original papers that he added hydrocortisone to the cell culture as well. Hydrocortisone inhibits nitric oxide (NO) gas produced by Th1 cells and promotes the formation of regenerative proteins. Regenerative proteins, also known as virus-like particles, are what Gallo called HIV. “