” In October 2019, the Johns Hopkins Center for Health Security hosted a pandemic tabletop exercise called Event 201 with partners, the World Economic Forum and the Bill & Melinda Gates Foundation. Recently, the Center for Health Security has received questions about whether that pandemic exercise predicted the current novel coronavirus outbreak in China.
To be clear, the Center for Health Security and partners did not make a prediction during our tabletop exercise. For the scenario, we modeled a fictional coronavirus pandemic, but we explicitly stated that it was not a prediction. Instead, the exercise served to highlight preparedness and response challenges that would likely arise in a very severe pandemic.
We are not now predicting that the nCoV-2019 outbreak will kill 65 million people. Although our tabletop exercise included a mock novel coronavirus, the inputs we used for modeling the potential impact of that fictional virus are not similar to nCoV-2019. ”

Bill Gates predicted a coronavirus-like outbreak – down to it starting at a Chinese market – in 2019 Netflix documentary show ‘The Next Pandemic’
Bill Gates appeared in Netflix ‘Explained’ series to discuss risks of viral spread
The billionaire said world is ill-prepared to deal with global pandemic
Microsoft tycoon predicted virus outbreak would begin in wet market in China
In a 2019 Netflix documentary, billionaire Bill Gates predicted a killer virus could originate in China’s wet markets to rapidly infect the world

In what now appears to be an eerie premonition of future events, the Microsoft tycoon warned in an episode of the Netflix ‘Explained’ series that the world was ill-prepared to deal with a global pandemic.

In the series aired late last year Mr Gates had warned of the likelihood of a virus breaking out in one of China’s wet markets – exactly like the one in Wuhan where this new outbreak of Coronavirus is believed to have originated.
In the episode titled ‘The Next Pandemic’ the documentary producers go to a wet market in Lianghua, China, where animals are killed and the resulting meat sold in the same place.

This, the documentary explained, makes the wet markets a ‘disease X factory’ as the different animal corpses are stacked on top of each other, blood and meat mixing, before being passed from human to human.
‘All the while, their viruses are mixing and mutating, increasing the odds that one finds its way to humans,’ the documentary goes on to explain.

In the episode, Mr Gates also warned the world was ill-prepared to deal with the implications of the viral spread of disease when cures were often years away.

He said if nothing was done to better prepare for pandemics the time would come when the world would look back and wish it had invested more into potential vaccines. 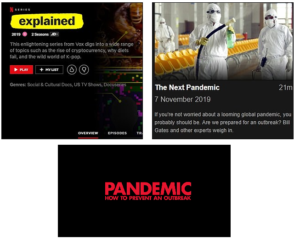 31 DEC 2019:
First cases detected
China has alerted the World Health Organization (WHO) of several flu-like cases in Wuhan, the capital of Central China’s Hubei province with 11 million population. Patients have been quarantined and health authorities commenced work on tracing the source of the flu.

31 JAN 2020 :
Global health emergency declared on 31 January 2020
The novel coronavirus outbreak from the city of Wuhan, Hubei Province, China, in December 2019 spread to 25 more countries in less than two months.
Although the WHO declared the pandemic as a public health emergency of local concern in China, the fast spread to other countries led to the declaration of an emergency of global concern on 31 January.

On the exactly same day that the pandemic tabletop exercise called “Event 201” took place in New York ( OCTOBER 18, 2019 ), the 2019 Military World Games, officially known as the 7th CISM Military World Games, was held in Wuhan. There, the United Nations military personnel ( the Blue Helmets ) made their show: